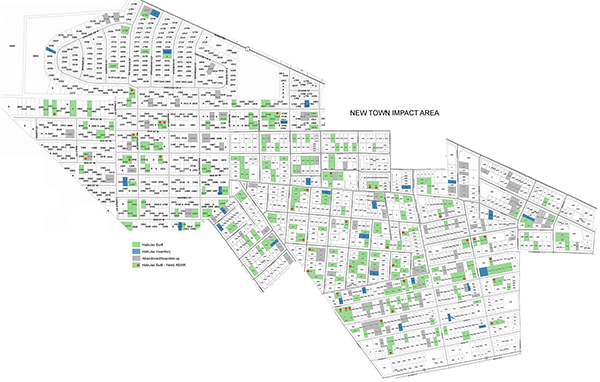 Modeled after the Harlem Children’s Zone, the NTSZ sought to enhance the lives of New Town’s children by generating a range of new opportunities. NTSZ, with its partners, also launched a comprehensive community revitalization effort. From 2011 to 2016, the most prodigious partner, HabiJax, realized strong housing outcomes, building and selling over 300 homes, completing 190 home repair projects and raising and investing over $16 million in the revitalization of New Town.

Local leaders were hopeful that economic development efforts might result in similar success. Their economic development strategy sought to revive the community’s Kings Road commercial corridor, which had experienced severe decline over several decades. In 2014, LISC JAX commissioned a MetroEdge study performed by Joel Bookman and Larisa Ortiz. While the MetroEdge analysis offered some strategies for small business development and improvement along Kings Road, its most significant finding was that the strength of formidable retail competitors a mere 9 minutes away coupled with New Town’s low income levels and low density did not bode well for the return of Kings Road as a vibrant, community-supported, retail corridor. There was however a collateral discovery that could/would prove to be an economic development “game changer”.

The “Discovery” – Hiding in Plain Sight!

Adjacent to New Town to the south and west of downtown lies the Beaver Street Industrial Corridor. Driving through the 100+-year-old corridor leaves most unimpressed.  It’s totally lacking curbside appeal. Many older buildings seem in need of a facelift. The district is littered with vacant structures. The terms “old and run-down” would not be an exaggeration when describing the current common perception of the Beaver Street Industrial District.

As part of the MetroEdge research Joel Bookman sought to learn about the corridor through conversations with a few of its businesses. Joel quickly learned that the outward appearance belied the strength of local businesses. The MetroEdge analysis shifted focus to measure the strength of this corridor. It found that in 2016, this sleepy, unsung and somewhat forgotten Beaver Street Industrial Corridor[1] was home to: 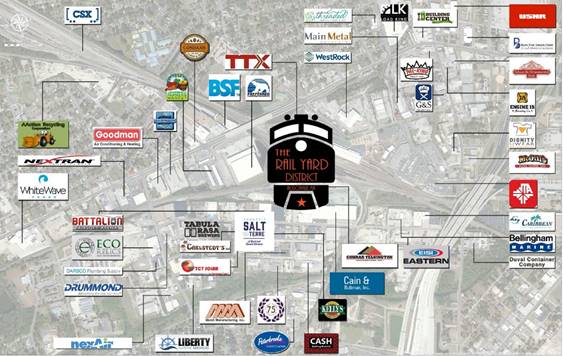 Like most cities, the prevalent economic development wisdom in many corners of Jacksonville centers around the acquisition/expansion of Amazon warehouse facilities, or the development of destination retail and high-end housing to the east of downtown near the Jacksonville Jaguar’s stadium, TIAA Bank Field. The strength of the Beaver Street corridor exceeds the economic yield that such projects promise. Its discovery has surprised many. And, from a LISC perspective, this “find” could not be in a better location – right next door to New Town.

Despite strong economic metrics this corridor presented a three-fold challenge:

In the summer of 2016 LISC JAX engaged Joel Bookman and Jim Capraro to work with Beaver Street District businesses to begin the organizing process. LISC JAX Program Officer James Coggin joined with Bookman and Capraro to form the business engagement team. They met with local businesses to understand their status and test their willingness to create a new industrial business organization.

Using the deep relationships that had been nurtured over decades by LISC Executive Director Janet Owens and the LISC JAX Local Advisory Board, the team gained entry to 40 businesses.

To engage and recruit businesses into the organizing process, the team used the technique of active listening. “Listening and only listening” (as in: not pitching) generated an understanding of each of the businesses, including their current state, aspirations, and challenges. During several interviews, the roles were reversed, as representatives of businesses questioned the LISC team about topics such as expansion, growth, labor needs, infrastructure concerns, available financing, and zoning constraints.

Fortunately, LISC had created a team that could respond to business inquiries in a meaningful way:

Combined, the team had experience with a wide array of topics and instruments that would prove meaningful to businesses when discussing topics such as:

These and similar topics were discussed by local businesses. The conversations built trust between the LISC team and businesses as it convinced them that engaging in a relationship with the team and their neighboring companies would prove meaningful to them.

As discussions ensued, the need to organize became clear. Several common issues could better (perhaps only) be confronted through joint action. These included:

Throughout the interviews,  several commonly held themes emerged: support for business  expansion, increasing local supply vendors, accessing a readily employable labor pool; and, concerns such as deteriorating and inadequate infrastructure, negative district perceptions, and the hazardous condition of vacant property were raised repeatedly – concerns that could not readily be addressed by any business alone.

The need to organize a Business District Council became “self-evident” to Beaver Street business leaders. At this point, the leaders who had become engaged eagerly accepted the responsibility to reach out to others within the district. They organized the first district wide convening in May 2017.

Come Together, Right Now, Over “We”. 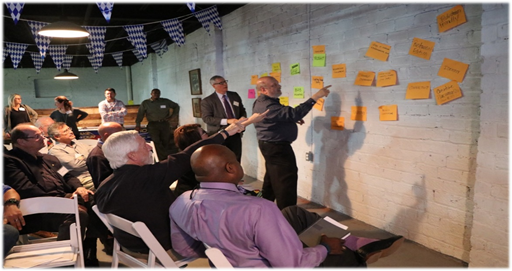 At the first district convening the original cadre of engaged business leaders presented the case for organizing an industrial business council. A facilitated discussion identified the priorities that would become the work of the council. These priorities were organized into four committees:

Throughout 2017 and into 2018 quarterly district convenings took place, each attracting more attendees than the last. Steady progress was made as the committees attended to their tasks.

The Birth of a Council

With strong support from LISC and Jacksonville Area Legal Aid (JALA), the newly incorporated Industrial District Business Council was established and celebrated in June of 2018. The governance committee also applied for and received an IRS 501(c)(3) tax-emption status.

The marketing committee  rebranded the area as the “Rail Yard District” – in recognition of the creation of the CSX railyard over 100 years ago that caused this clustering of manufacturers and warehouses.

At the June 2018 celebratory convening, LISC JAX Executive Director, Janet Owens was declared “The Godmother of the Rail Yard.”

Working for Rail Yard Businesses and the New Town Community

Now that the Rail Yard District Business District Council (RYDBC) has been established, its leaders are busy creating new relationships and working to fulfill their priorities. LISC has provided staffing through the placement of an AmeriCorps volunteer to serve as RYDBC’s District Engagement Coordinator.

The Marketing Committee is partnering with the Farmers Market in its “Moon Over the Market” promotion to increase customer traffic and increase awareness about the Rail Yard District.

LISC staff members are meeting with business owners to offer financing alternatives to those considering expansion.

And, ever true to their good natured civic mindedness, the leadership of the Rail Yard District is beginning to plan its first job fair in cooperation with the New Town Success Zone and LISC’s newly established Financial Opportunity Center in the heart of New Town.

This is only the beginning; so, stay tuned to this channel.[i]

Joel Bookman is a community revitalization consultant and an award winning Urban Planner, a CDC Executive Director for 25 years, and Chicago LISC’s Director of Programs for 9 years.

Jim Capraro is a community revitalization consultant. He worked as a community organizer on the national campaigns to pass the Home Mortgage Disclosure Act, and The Community Reinvestment act and served as an industry recognized CDC Executive Director for 35 years.

James Coggin came to develop housing for a Jacksonville CDC as a LISC Americorp volunteer after having served in the construction Industry. He then ascended to become a housing developer for that CDC and currently serves as Jacksonville LISC Program Officer.